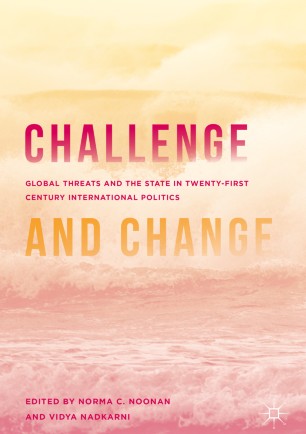 Global Threats and the State in Twenty-first Century International Politics

This edited volume addresses how the state system, the organizing political institution in world politics, copes with challenges of rapid change, unanticipated crises, and general turmoil in the twenty-first century. These disruptions are occurring against the background of declining US influence and the rising power of countries in Asia, Africa, and Latin America. Traditional inter-state security concerns coexist with new security preoccupations, such as rivalries likely to erupt over the resources of the global commons, the threat of cyber warfare, the ever-present threat of terrorism, and the economic and social repercussions of globalization.   The contributors explore these key themes and the challenges posed by rapid change.

Norma Noonan is Professor Emerita of Political Science and Leadership Studies at Augsburg College, USA. She is the co-editor of Emerging Powers in Comparative Perspective (2013), co-author and co-editor of Women in Russian Politics and Society (1996), and editor and contributor to Encyclopedia of Russian Women’s Movements (2001).
Vidya Nadkarni is Professor of Political Science at the University of San Diego, USA. She is the author of Strategic Partnerships in Asia (2010), co-editor of Emerging Powers in Comparative Perspective (2013), and co-author of The Foreign Policy of Russia (Fifth Edition, 2014)