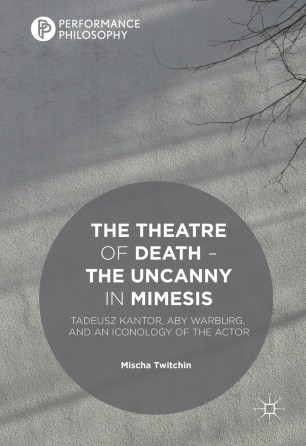 The Theatre of Death – The Uncanny in Mimesis

Tadeusz Kantor, Aby Warburg, and an Iconology of the Actor

Distinct from the dominant expectation that actors should appear life-like onstage, why is it that some theatre artists – from Craig to Castellucci – have conceived of the actor in the image of the dead? This book explores such questions through the implications of the twofold analogy proposed in its very title: as theatre is to the uncanny, so death is to mimesis; and as theatre is to mimesis, so death is to the uncanny.

Walter Benjamin once observed that: “The point at issue in the theatre today can be more accurately defined in relation to the stage than to the play. It concerns the filling-in of the orchestra pit. The abyss which separates the actors from the audience like the dead from the living…” If the relation between the living and the dead can be thought of in terms of an analogy with ancient theatre, what about modernity?

Mischa Twitchin is a lecturer in Theatre and Performance at Goldsmiths, University of London, UK. Besides his academic work, he is a founder-member of the performance collective Shunt.