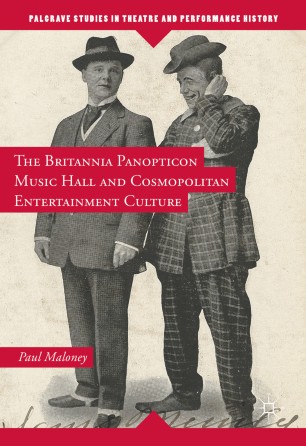 “Paul Maloney both concentrates and expands our understanding of this dominant institution in popular culture in evocative and challenging scholarship. Reconstructing the business,  performance, and audience histories of Glasgow’s Britannia hall, Maloney traces its wider enmeshment in the city’s burgeoning entertainment industry, the development of a new cosmopolitanism, and the negotiation of crucial issues of modern pleasure  and identity on the stage and in the streets.”- Peter Bailey, Visiting Professor of History, Indiana University USA

“This major contribution to the history of music hall in Britain explores the story of the Britannia, Glasgow. The long-surviving hall is treated as a case study in the development of music hall beyond London, and as such it delivers a convincing, innovative analysis as nuanced as it is fascinating.” – Jacky Bratton, Emeritus Professor of Theatre and Cultural Studies, Royal Holloway University of London, UK

Focusing on Glasgow’s earliest surviving music hall, the Britannia, later the Panopticon, this book explores the role of one of the city’s most iconic cultural venues within the cosmopolitan entertainment market that emerged in British cities in the nineteenth century. Shedding light on the increasing diversity of commercial entertainment provided by such venues – offering everything from music hall, early cinema and amateur nights to waxworks, menageries and freak shows - this study also encompasses the model of community-based, working-class music hall which characterised the Panopticon’s later years, challenging narratives of the primacy of city centre variety.

Providing a comprehensive analysis of this dynamic popular theatre of the industrial age, Maloney examines the role of the hall’s managers, marketing and promotional strategies, audiences, and performing genres from the hall’s opening in 1859 until final closure in 1938. The book also explores stage representations of Irish and Jewish immigrant communities present in surrounding city centre areas, demonstrating the Britannia’s diasporic links to other British cities and centres in North America, thus providing a multifaceted and pioneering account of this still extant Victorian music hall.

Paul Maloney has worked as a stage director in opera and has taught, researched and published widely in the fields of Scottish popular theatre and twentieth century Scottish political theatre.  Research Fellow at Queen’s University Belfast, Northern Ireland, he is the author of Scotland and the Music Hall, 1850-1914 (2003).

“ … the book is a pleasure to read – a treasure trove of examples of nineteenth- and twentieth-century popular performance, a testimony to the ways in which managers negotiated with the community around them and a well-written investigation into the relationship between urban shifts and the tensions and representations of contemporary immigrant communities.” (Louise Wingrove, Journal of Victorian Culture, Vol. 23 (2), April, 2018)

“Paul Maloney’s enthusiasm and meticulous re - search make this a fabulous and much welcome book. … The Britannia Panopticon Music Hall and Cosmopolitan Entertainment Culture is a rich study, thoughtfully constructed and expertly carried through. It will be of interest to all scholars of nineteenth- and early twentieth-century performance cultures and social histories, and is a much appreciated addition to the Palgrave studies in theatre and performance history series.” (Maggie B. Gale, New Theatre Quarterly, November, 2017)
Buy options