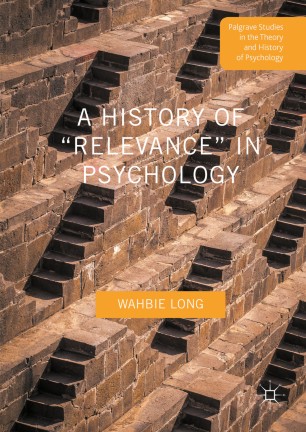 A History of “Relevance” in Psychology

Palgrave Studies in the Theory and History of Psychology

This book represents the first attempt to historicise and theorise appeals for ‘relevance’ in psychology. It argues that the persistence of questions about the ‘relevance’ of psychology derives from the discipline’s terminal inability to define its subject matter, its reliance on a socially disinterested science to underwrite its knowledge claims, and its consequent failure to address itself to the needs of a rapidly changing world.

The chapters go on to consider  the ‘relevance’ debate within South African psychology, by critically analysing discourse of forty-five presidential, keynote and opening addresses delivered at annual national psychology congresses between 1950 and 2011, and observes how appeals for ‘relevance’ were advanced by reactionary, progressive and radical psychologists alike.

The book presents, moreover, the provocative thesis that the revolutionary quest for ‘social relevance’ that began in the 1960s has been supplanted by an ethic of ‘market relevance’ that threatens to isolate the discipline still further from the anxieties of broader society. With powerful interest groups continuing to co-opt psychologists without relent, this is a development that only psychologists of conscience can arrest.