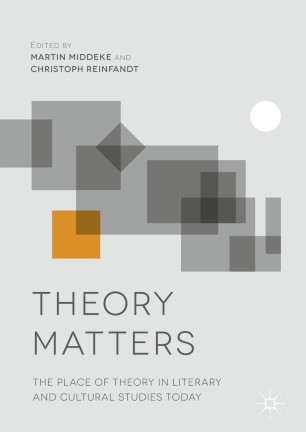 The Place of Theory in Literary and Cultural Studies Today

This book demonstrates that theory in literary and cultural studies has moved beyond overarching master theories towards a greater awareness of particularity and contingency – including its own. What is the place of literary and cultural theory after the Age of Theory has ended?
Grouping its chapters into rubrics of metatheory, cultural theory, critical theory and textual theory, the collection demonstrates that the practice of “doing theory” has neither lost its vitality nor can it be in any way dispensable. Current directions covered include the renewed interest in phenomenology, the increased acknowledgement of the importance of media history for all cultural practices and formations, complexity studies, new narratology, literary ethics, cultural ecology, and an intensified interest in textual as well as cultural matter.

Martin Middeke holds the Chair of English Literature at the University of Augsburg, Germany, and is Visiting Professor of English at the University of Johannesburg, South Africa. He has published widely in the fields of 19th to 21st century drama and fiction and aspects of deconstruction, literary anthropology and ethics. Major book publications include: Biofiction (ed. 1999), Zeit und Roman (ed. 2002), Die Kunst der gelebten Zeit (2004), Literature and Circularity (ed. 2009), The Literature of Melancholia (ed. 2011), Literature and/as Ethics (ed. 2011), and Representations of the Precarious in Contemporary British Drama (ed. 2016).
Christoph Reinfandt is Chair of English Literature at the University of Tübingen, Germany. He has published widely on the history of the novel, Romanticism, and contemporary literature and culture. His theoretical work tends to be anchored in sociological systems theory. Major book publications include: Der Sinn der fiktionalen Wirklichkeiten (1997), Systems Theory and Literature (ed. 2001), Romantische Kommunikation (2003), The Cultural Validity of Music in Contemporary Fiction (ed. 2006), Englische Romantik (2008), Multi-Ethnic Britain 2000+ (ed. 2008), Romanticism Today (ed. 2009), and Voice and Perception in Transcultural Realities: Focus on India (ed. 2013).