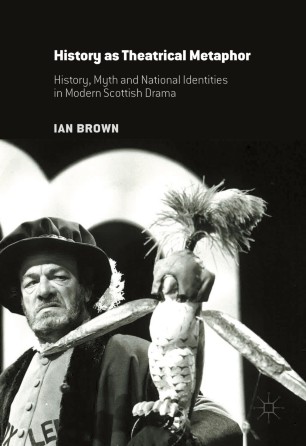 "Focusing on the theatrical use of historical figures, narratives and myths, History as Theatrical Metaphor considers the malleability of history and how this relates to different times, changing perceptions of the nation and shifting political agendas in Scotland. The major strength of this important and lively new book is Ian Brown’s encyclopaedic knowledge of the rich and diverse theatrical culture of Scotland, combined with his understanding of wider European traditions and his experience as a playwright. This combination enables him to trace genealogies, offer comparative commentary and it facilitates a deep understanding of the ideological consequences of themes, myths, language, dramaturgy and theatrical strategies. Focusing on leading Scottish playwrights including David Greig, Liz Lochhead, John McGrath, Robert McLellan and Rona Munro, Brown explores how they have created plays that draw attention to competing versions of history, marginalised histories and the potential to revision history as a way of engaging in debates around such themes as power, independence, gender and the past and future of the Scottish nation." - Nadine Holdsworth, Professor of Theatre and Performance, Warwick University, UK

"Ian Brown has written an excellent book about the infinite adaptability of history. He opened my eyes to a world of pre-20th century Scottish drama of which I was only dimly aware. He also writes about more familiar figures, from Barrie and Bridie to Lochhead and Munro with a scholarly brio that demonstrates their ability to find a metaphor for the present in the past. I learned a massive amount from Ian Brown's informed intelligence." - Michael Billington, the Guardian theatre critic

Setting these writers’ achievements in the context of their Scottish and European predecessors, Ian Brown offers fresh insights into key aspects of Scottish theatre. As such, this represents the first study to offer an overarching view of historical representation on Scottish stages, exploring the nature of ‘history’ and ‘myth’ and relating these afresh to how dramatists use – and subvert – them. Engaging and accessible, this innovative book will attract scholars and students interested in history, ideology, mythology, theatre politics and explorations of national and gender identity.