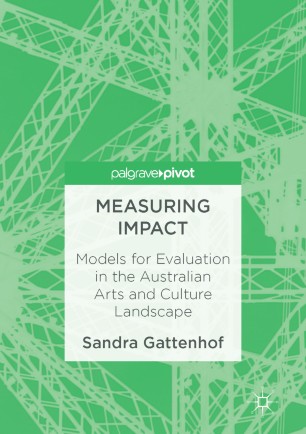 Models for Evaluation in the Australian Arts and Culture Landscape

This book investigates the relationship developed between the researcher/evaluator and the commissioning arts and cultural producer in providing an opportunity to rethink the traditional process of reporting back on value and impact through the singular entity of funds acquittal.  Using three commissioned evaluations as examples, the discussion outlines the two positions most often adopted by researchers/evaluators, external and distanced or embedded and collaborative, and will argue the merits and deficiencies of the two approaches. This text also investigates the role of the researcher/evaluator as a broker of stakeholder interests; how cultural organizations can partner in data gathering and develop a participatory approach to the research; what role the researcher/evaluator can have in the dissemination of evaluation findings and recommendations; and makes recommendations on which partnership type is more affective in a commissioned evaluation model for an arts and culture organization in the Australian landscape.
Sandra Gattenhof is Head of Drama in the Creative Industries Faculty, Queensland University of Technology. Sandra specialises in drama/arts in schools & communities, postdramatic theatre and contemporary performance for children and young people. She is a former Vice President of the International Drama/Theatre and Education Association (IDEA); Drama Australia President and its Director of Arts Education and Industry Partnerships; Drama Queensland President; and a Chair or Board member of a number of youth arts organizations at national and state levels. In 2011 Sandra was recipient of QUT Creative Industries Faculty Dean’s Award for Excellence in Research and Innovation and in 2012 was awarded Drama Queensland Life Member Award for Longstanding Contribution to the Drama Community.

Sandra Gattenhof is Head of Drama in the Creative Industries Faculty, Queensland University of Technology, Australia. She specializes in arts evaluation, drama/arts in schools and communities, postdramatic theatre and contemporary performance for children and young people. Her previous publications include Drivers of Change: Contemporary Theatre for Young People (Drama Australia, 2006) and articles in journals such as the Journal of Arts & Communities, Journal of Drama and Theatre Education in Asia, Health Promotion International and Journal of Applied Arts and Health, amongst others.