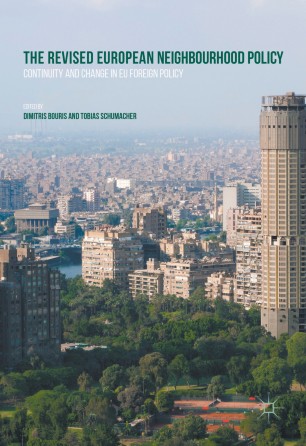 This book analyses the revised European Neighbourhood Policy (ENP) which entered into force in May 2011, thereby replacing its predecessor of 2003/2004. The edited volume provides a structured and comprehensive overview of the most recent developments in EU foreign policy (EUFP) towards the EU’s southern and eastern neighbourhood through the prism of continuity and change. Topics covered include: conceptual, theoretical and methodological issues; the legal and institutional aspects of the revised ENP and the changes brought by the entering into force of the Lisbon Treaty; and conflicts and crises in the EU’s neighbourhood, such as the Western Sahara conflict, the Israeli-Palestinian conflict, the South Caucasus conflicts and the crisis in Ukraine. The authors also focus on sectoral cooperation, analysing the changes brought by the revised ENP of 2011 in the domains of energy cooperation and migration. This volume will appeal to scholars and upper level students in EU/European Studies, International Relations, Political Science, as well as practitioners and policy-makers in the field.

Dimitris Bouris is Assistant Professor at the Department of Political Science, University of Amsterdam, the Netherlands. He is also Associate Research Fellow at the European Neighbourhood Policy Chair at the College of Europe (Natolin). He is the author of The European Union and Occupied Palestinian Territories: State-building without a State (2014) for which he was selected as Politics and International Relations author of the month for February 2014.

Tobias Schumacher is Chairholder of the European Neighbourhood Policy Chair at the College of Europe (Natolin), Poland. He is also an Associate Senior Research Fellow at the Center for International Studies (CES) at the Lisbon University Institute (ISCTE-IUL) and in the first half of 2016 was a John F. Kennedy Memorial Fellow at the Minda de Gunzburg Center for European Studies at Harvard University.

“The neighbourhood is crucial to the future of the EU, in terms of not only security, but also and especially governance, sustainable development and social equality. The authors in this volume draw on their unique expertise to unpack the key issues and highlight what has changed and what needs changing in the European stance.” (Federica Bicchi, Associate Professor in International Relations of Europe, The London School of Economics and Political Science)

“At a moment when the EU is once again reviewing its signature European Neighbourhood Policy, this book is instructive in assessing the last revision to this strategy in 2011. Bouris and Schumacher have assembled an interestingly eclectic mix of contributions, many of which offer useful perspectives somewhat different from standard accounts of EU foreign policy. The volume sheds light on why the promised ENP upgrade went awry and failed to divert the crises with which the EU now grapples to its east and south.” (Richard Youngs, Professor of International Relations, University of Warwick, UK)

“This expansive set of chapters clarifies the urgency and complexity involved in the EU’s revised policy for engagement with the Union’s southern and eastern neighborhoods. Conceptually sophisticated and empirically rich, the book tackles the ontological ambivalence, normative tensions, and operational challenges in the EU’s Revised ENP, leaving no doubt about the inextricable, reflexive linkages between the future of the EU and developments in countries to the south and east.” (Elizabeth H. Prodromou, Visiting Associate Professor of Conflict Resolution, The Fletcher School of Law and Diplomacy, USA)

“‘Dimitris Bouris’ and Tobias Schumacher's book will become an indispensable read in the study of the ENP. It provides a major new critical synthesis of the Union’s relations with its immediate neighbours in the framework of the revised ENP of 2011. This is a must-read for anyone who wants to understand the ENP's subsequent reviews and thus the EU's evolving foreign policy towards its 'near abroad’.” (Sharon Pardo, Jean Monnet Chair ad personam— Ben-Gurion University of the Negev, Israel)