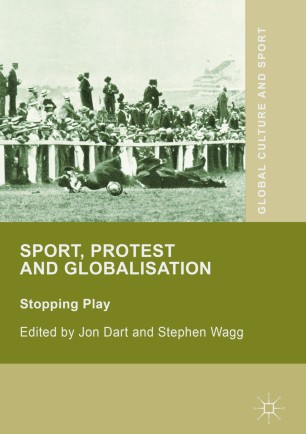 This volume is built around three assumptions – first, that for huge numbers people around the world, including many sport lovers, there are more important things in life than sport; second, that the governance of sport is in many ways problematic and needs to be confronted; and, third, that contrary to the still-popular belief that sport and politics don’t mix, sport often provides an ideal theatre for the enacting of political protest. The book contains studies of a range of protests, stretching back to the death of suffragist Emily Davison at the Derby of 1913 and encompassing subsequent protests against the exclusion of women from the sporting arena; the Berlin Olympics of 1936; Western imperialism; the Mexico Olympics, 1968; the state racism of apartheid in South Africa; the effect of the global golf industry on ecosystems; Israeli government policy; resistance to the various attempts to bring the Olympic Games  to Canadian and American cities; the cutting of welfare benefits for disabled British citizens; class privilege in the UK; Russian anti-gay laws; and high public spending on sport mega-events in Brazil.

The collection will be of interest to scholars and students with an interest in Sports Studies, History, Politics, Geography, Cultural Studies and Sociology.

Jon Dart is Senior Lecturer in the Carnegie Faculty, Leeds Beckett University, UK. He has published on topics such as the political economy of sport and social media, sports fandom and sports policy in the Middle East. He has a particular interest in future of the relationship between sport and the social sciences within UK higher education institutions.

Stephen Wagg is Professor in the Carnegie Faculty, Leeds Beckett University, UK. He has written widely on the politics of sport, as well as on the politics of childhood and of comedy. His latest book is The London Olympics of 2012: Politics, Promises and Legacy (Palgrave, 2015) and he edited The Palgrave Handbook of Olympic Studies (Palgrave, 2012) with Helen Jefferson Lenskyj.

“This new text … responds to the need to appreciate and comprehend the capacity of sport to alter social, economic and political agendas through the vehicle of public protest. … In addressing a gap in the existing literature of sports studies and sport sociology, Wagg and Dart perform a vital service for academics, students and the lay-reader.” (Russell Holden, idrottsforum.org, September, 2017)

“Sport, Protest and Globalisation is a rich, wide-ranging compendium chockfull of sport-induced political dissent from the twentieth and twenty-first centuries. … this book is a must read for those interested in the power of sport and the capacity of activists to leverage sport for progressive social change. Sport, Protest and Globalisation is a significant contribution to both social movement studies and sports studies. The book has potential use as a textbook for undergraduate courses in both fields.” (Jules Boykoff, Social Movement Studies, April, 2017)
Buy options