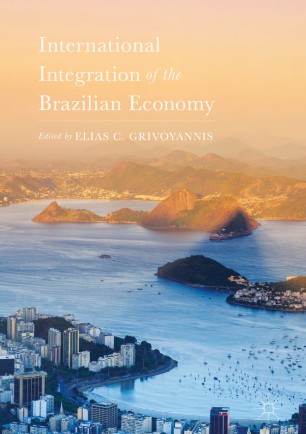 International Integration of the Brazilian Economy

"A fascinating book exploring through authoritative analysis, innovative, well-conceived and compelling approaches the contributing forces in Brazil’s economic integration with the world-economy. Enables comparative analysis of Brazil with the BRIC emerging economies and the G7 advanced industrialized countries."
Bingtao Song, Dean of the School of Economics, Henan University, Kaifeng, P.R. China
“Grivoyannis brings together pioneering studies by the most astute native economics scholars of Brazil. A compelling account of international economic integration, rich with detail, firmly grounded on extensive primary source data, sound scholarship, and outstanding work in delving into Brazil’s role within the global economy.”
John Malindretos, William Paterson State University of New Jersey, USA
“To understand the forces of globalization and Brazil's international economic integration you must first read this book. This is the only scholarly book available on this subject.”
Ni Yuan, University of Chinese Academy of Social Sciences, Beijing, China
Brazil is the most populous economy in Latin America with the second highest GDP among the emerging BRIC economies, after China, and the second per capita GDP among the BRIC economies after Russia.  The objective of this book is to provide a thorough historical, statistical, and institutional description of the factors that affect and are affected by Brazil’s international trade and integration with the world economy. It includes a most recent account of what is presently going on in Brazil and the type of economy from which Brazil is emerging. The authors use Brazil as a case study and explain both the process and the outcome of international economic integration by analyzing in each chapter a different contributing factor to the benefits and costs from Brazil’s economic interdependency with the world economy. This makes the reading of this book extremely valuable. The topics addressed in this book will increase the reader’s awareness of the institutional, economic, and cultural forces that shape the dynamism of Brazil’s international trade and integration with the world economy, and will continue to do so in future years.

Elias Constantine Grivoyannis is the Associate Professor of Economics at Yeshiva University in New York City. His current research interests are in the fields of Emerging Economies, International, Financial, and Labor Economics, Forensic Economics, and Economics Efficiency and Justice.