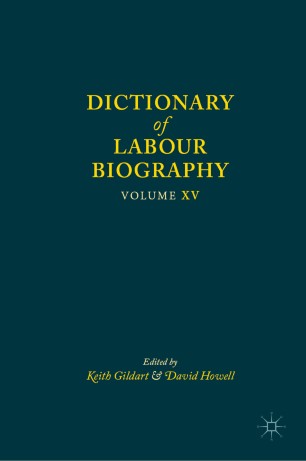 The Dictionary of Labour Biography has an outstanding reputation as a reference work for the study of nineteenth and twentieth century British history. Volume XV maintains this standard of original and thorough scholarship. Each entry is written by a specialist drawing on an array of primary and secondary sources. The biographical essays engage with recent historiographical developments in the field of labour history. The scope of the volume emphasises the ethnic and national diversity of the British labour movement and neglected political traditions.

Keith Gildart is Professor of Labour and Social History at the University of Wolverhampton, UK. He has published widely on the British Labour movement. He is the author of North Wales Miners: A Fragile Unity, 1945-1996 (2001). His most recent book is Images of England through Popular Music: Class, Youth, and Rock ‘n’ Roll, 1955-76 (2013).

David Howell is Emeritus Professor of Politics at the University of York, UK. He has written extensively on the Labour Party and the trade union movement. He is the author of MacDonald's Party: Labour Identities and Crisis, 1922-1931 (2002). His most recent book is Mosley and British Politics 1918-32: Oswald’s Odyssey (2015).