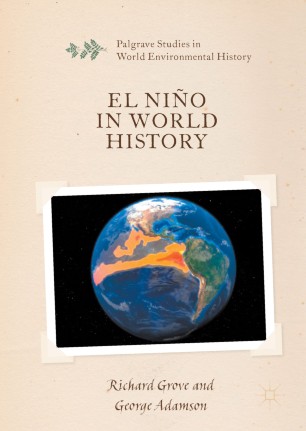 This book examines the role of the El Niño Southern Oscillation (ENSO) in society. Throughout human history, large or recurrent El Niños could cause significant disruption to societies and in some cases even contribute to political change. Yet it is only now that we are coming to appreciate the significance of the phenomenon. In this volume, Richard Grove and George Adamson chart the dual history of El Niño: as a global phenomenon capable of devastating weather extremes and, since the 18th century, as a developing idea in science and society. The chapters trace El Niño’s position in world history from its role in the revolution in Australian Aboriginal Culture at 5,000 BP to the 2015-16 ‘Godzilla’ event. It ends with a discussion of El Niño in the current media, which is as much a product of the public imagination as it is a natural process.

Richard Grove is a pioneering global environmental historian whose numerous books include Green Imperialism; Ecology, Climate and Empire; and El Niño- history and crisis. He was Professorial Fellow at Centre for World Environmental History, University of Sussex and ARC Professorial Fellow at Australian National University. This book represents some of his most recent, exciting and unpublished work on the life and times of El Niño.

George Adamson is a historical climatologist with a focus on El Niño and the Indian monsoon. He is Lecturer in Geography at King’s College London, UK.

“Adamson and Grove’s partner, Vinita Damodaran, are to be congratulated for their endeavors to honor Grove’s work and to advance the exciting field of climate history. Engagingly written and thoughtfully illustrated, this text will become a vital reference for geographers and historians studying the state of El Niño science and its history, while highlighting potential areas for further interdisciplinary research on El Niño and the Southern Oscillation in a warming world.” (Ruth Morgan, H-Water, networks.h-net-org, January, 2019)
Buy options