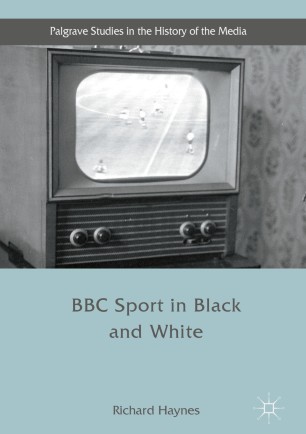 BBC Sport in Black and White

This book provides the first detailed account of the formative decades of BBC televised sport when it launched its flagship programmes Sportsview, Grandstand and Match of the Day. Based on extensive archival research in the BBC’s written archives and interviews with leading producers, editors and commentators of the period, it provides a ‘behind-the-scenes’ narrative history of this major institution of British cultural life. In 2016 the BBC celebrated the fiftieth anniversary of its television coverage of England’s World Cup victory. Their coverage produced one of the most oft-played moments in the history of television, Kenneth Wolstenholme’s famous line: ‘Some people are on the pitch, they think it’s all over … it is now!’ as Geoff Hurst scored England’s fourth goal, securing England’s 4-2 victory. It was a landmark in English football as well as a watershed in the BBC’s highly professionalised approach to televised sport. How the BBC reached this peak of television expertise, and who was behind their success in developing the techniques of televised sport, is the focus of this book.

Richard Haynes is Professor of Communications, Media and Culture and Member of the Stirling Media Research Institute at the University of Stirling, UK. He is author or co-author of several books on the relationships between sport and the media including The Football Imagination: The Rise of Football Fanzine Culture (1995), Football in the New Media Age (2003) and Power Play: Sport, the Media and Popular Culture (2009).

“The book … has been enriched by the presence of the BBC, and it has also been affected in numerous ways by the presence of cameras in the rules, the engagements of audiences and lure of advertisers. Readers interested in the evolution of sport, social and cultural history and the development of technology will be similarly enriched by this nostalgic and worthy work.” (Jon Gemmell, The International Journal of the History of Sport, March 17, 2019)