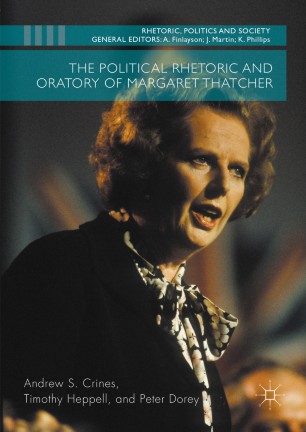 The Political Rhetoric and Oratory of Margaret Thatcher

This book examines the political oratory, rhetoric and persona of Margaret Thatcher as a means of understanding her justifications for ‘Thatcherism’. The main arenas for consideration are set piece speeches to conference, media engagements, and Parliamentary orations. Thatcher’s rhetorical style is analysed through the lens of the Aristotelian modes of persuasion (ethos, pathos, logos). Furthermore, the classical methods of oratorical engagement (deliberative, epidictic, judicial) are employed to consider her style of delivery. The authors place her styles of communication into their respective political contexts over a series of noteworthy issues, such as industrial relations, foreign policy, economic reform, and party management. By doing so, this distinctive book shines new light on Thatcher and her political career.

Andrew S. Crines is Lecturer in British Politics at the University of Liverpool, UK. He is the co-editor (with Richard Hayton) of two volumes entitled Labour Orators from Bevan to Miliband (2015) and Conservative Orators from Baldwin to Cameron (2015). He is also the co-editor (with D. S. Moon and R. Lehrman) of Democratic Orators from JFK to Obama (2016) and (with K. Hickson) Harold Wilson: The Unprincipled Prime Minister? (2016). He tweets at @AndrewCrines.

Timothy Heppell is Associate Professor of Politics at the University of Leeds, UK. He is the author of The Tories from Churchill to Cameron (2014); the editor of Leaders of the Opposition (2012) and the co-editor (with D. Seawright) of Cameron and the Conservatives: The Transition to Coalition Government (2012).

Peter Dorey is Professor of British Politics at Cardiff University, UK. He is the author of a range of books focused on British politics such as British Conservatism: The Politics and Philosophy of Inequality (2011) and sits on the editorial board of the British Politics journal.

“Margaret Thatcher was not a natural communicator. But she became a very effective one. This book shows how. It is full of insights into a neglected aspect of how Thatcher came to dominate British politics.” (Andrew Gamble, University of Sheffield, UK)

“A fascinating insight into the world of speech writing. The authors show just how much oratory mattered to Margaret Thatcher, revealing precisely what it was that made her speeches so memorable. Vivid accounts of Thatcher's public appearances are matched with thorough analysis to enhance our understanding of this formidable Prime Minister.” (Louise Thompson, University of Surrey, UK)

“Thatcher meets Aristotle - and it works! Covering her time in both government and opposition, and picking through not just her performances in parliament and at party conferences but also media interviews, this fascinating book reminds us of how hard (and how smart) Britain's only female Prime Minister had to work in order to stay on top - rhetorically and oratorically - of what was then still very much a man's world.” (Tim Bale, Queen Mary University of London, UK)