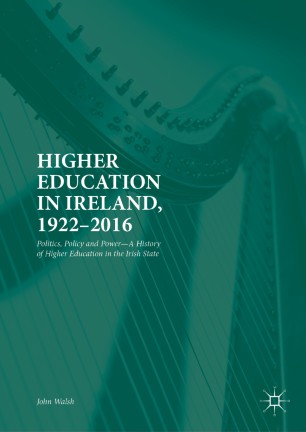 Politics, Policy and Power—A History of Higher Education in the Irish State

This book explores the emergence of the modern higher education sector in the independent Irish state. The author traces its origins from the traditional universities, technical schools and teacher training colleges at the start of the twentieth century, cataloguing its development into the complex, multi-layered and diverse system of the early twenty-first century. Focusing on the socio-political and cultural contexts which shaped the evolution of higher education, the author analyses the interplay between the state, academic institutions and other key institutional actors – notably churches, cultural organizations, employers, trade unions and supranational bodies. This study explores policy, structural and institutional change in Irish higher education, suggesting that the emergence of the modern higher education system in Ireland was influenced by ideologies and trends which owed much to a wider European and international context.
The book considers how the exercise of power at local, national and international level impinged on the mission, purpose and values of higher education and on the creation and expansion of a distinctive higher education system. The author also explores a transformation in public and political understandings of the role of higher education, charting the gradual evolution from traditionalist conceptions of the academy as a repository for cultural and religious value formation, to the re-positioning of higher education as a vital factor in the knowledge based economy. This comprehensive volume will appeal to students and scholars of the Irish education system, educators and practitioners in the field, and those interested in higher education in Ireland more generally.