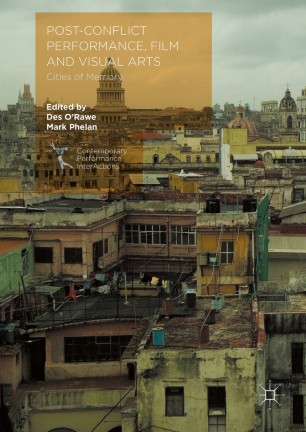 Drawing on a range of cities and conflicts from Europe, Africa and the Middle East, the collection explores the post-conflict condition as it is lived and expressed in modern cities such as Berlin, Belfast, Bilbao, Beirut, Derry, Skopje, Sarajevo, Tunis, Johannesburg and Harare. Post-Conflict Performance, Film and Visual Arts: Cities of Memory investigates how the memory of conflict can be inscribed in historical monuments, human bodies and hermeneutic acts of mapping, traversing, representing, and performing the city. Several essays explore the relations between memory, history and urban space; where memory is located and how it is narrated, as well as various aspects of embodied memory; testimonial memory; traumatic memory; counter-memory; false memory; post-memory. Other essays examine the representations of post-war cities and how cultural imaginations relate to the politics of reconstruction in places devastated by protracted urban warfare. Post-Conflict Performance, Film and Visual Arts: Cities of Memory offers a comparative survey of the complex and often controversial encounters between public art, political memory and commemoration in divided societies, as well as offering insights into the political and ethical difficulties of balancing the dynamics of forgetting and remembering.

Des O’Rawe lectures in Film Studies at Queen’s University Belfast, Northern Ireland. He has published on various aspects of cinema aesthetics and is particularly interested in interdisciplinary approaches to the study of film and visual culture. His book, Regarding the Real: Cinema, Documentary, and the Visual Arts, publishes in 2016.

Mark Phelan lectures in Drama at Queen's University Belfast, Northern Ireland. He has published widely on Irish theatre and performance with articles in Theatre Survey, Theatre Journal, Modern Drama. Presently, his research is concerned with role that the arts - specifically theatre and performance - 'play' in ongoing processes of conflict transformation in Northern Ireland.