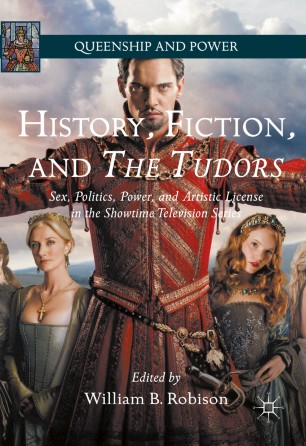 History, Fiction, and The Tudors

This is the first book-length study of the award-winning historical drama The Tudors. In this volume twenty distinguished scholars separate documented history, plausible invention, and outright fantasy in a lively series of scholarly, but accessible and engaging essays. The contributors explore topics including Henry VIII, Catherine of Aragon, Anne Boleyn, his other wives and family, gender and sex, kingship, the court, religion, and entertainments.

“The highly readable essays by the distinguished scholars in this book compare the depiction of Henry VIII and his world in The Tudors with the historical reality.  Covering not only the king and his wives, family, courtiers and ministers,. but also the political, social and cultural world in which they existed, this book will be of enormous value to teachers of history.  It will also be of interest to those who have watched the television series and are curious to know what really happened.” (Thomas Freeman, Lecturer in History, University of Essex, and co-editor of “Tudors and Stuarts on Film: Historical Perspectives”)

“As a guide to the historical errors and distortions of the popular television series The Tudors, this book is unequalled in the breadth and depth of its coverage. Twenty expert contributors in twenty chapters examine in detail both what The Tudors got right and the many places where the real history was distorted or ignored. C. L. R. James, the great Caribbean historian, wrote, 'There is no drama like the drama of history.' It is a dictum that the contributors appreciate and the makers of The Tudors are shown to have clearly neglected.” (Ronald H. Fritze, Dean of the College of Arts and Sciences and Professor of History, Athens State University, and editor of “Historical Dictionary of Tudor England”)

“For better or worse, Showtime's The Tudors will define the way a generation of global television viewers visualizes and thinks about Henry VIII and his court. But what should we think about The Tudors? In this admirably wide-ranging volume William Robison and an international team of scholars of Tudor history carefully evaluate the series's strengths and weaknesses, its insights and moments of apparent madness. This is a comprehensive guide to The Tudors as both history lesson and popular cultural phenomenon.” (Greg Walker, Regius Professor of Rhetoric and English Literature, University of Edinburgh, and author of “The Private Life of Henry VIII: A British Film Guide”)