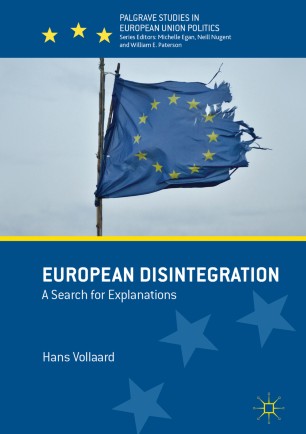 A Search for Explanations

“Hans Vollaard leads the debate about contemporary developments in Europe as the process of integration appears headed in reverse. His book is an essential reference point both for those who want to know what happened to existing theories and for those who are seeking to understand how popular dissatisfaction with the European project is likely to have an impact.” –Professor Erik Jones, Johns Hopkins University, USA

“This is a brave pioneering effort to make sense of the current European predicament. Curiously, we have numerous theories of European integration and virtually none regarding the opposite process. Hans Vollaard’s book helps us to map and explain European disintegration from diverse theoretical angles. Students and practitioners of the EU should pay attention to his arguments.” –Professor Jan Zielonka, University of Oxford, UK

This book accounts for whether and how the path of the European Union (EU) has developed towards potential disintegration. These questions have become particularly relevant since the outbreak of the debt crises in the Eurozone and the Brexit referendum. The author critically subverts theories of European integration and analyses the rise and fall of federations, empires and states in a comparative perspective. The most promising theory presented here indicates that Brexit is not likely to be followed by other member states leaving the EU. Nevertheless, the EU has been undermined from within as it cannot adequately address Eurosceptic dissatisfaction from both the left and right. This book is an essential read for everyone interested in the EU and its future.