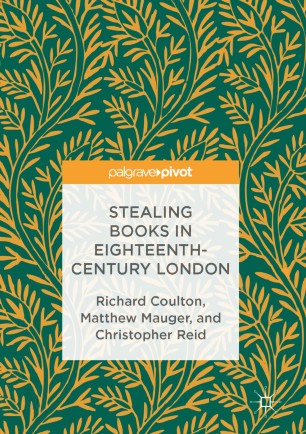 This study offers an authoritative and readable account of the hidden history of book theft in eighteenth-century London. It exploits a rich primary source, the compelling narratives of crime contained in the digitised Proceedings of the Old Bailey. The authors explain how cases of book theft came to court, and how in the ensuing trials the nature of the book itself became a question for legal debate. They assess the motives which led Londoners to steal books and the methods they employed in thefts from households and booksellers. Finally, the authors ask what the Proceedings tells us about the social ownership of books, and how the phenomenon of book theft differently affected book producers and consumers. Stealing Books in Eighteenth-Century London will appeal to readers interested in the connected histories of metropolitan life, crime, and the book in this period, and in the uses of digital resources in humanities research.
Dr Richard Coulton is a lecturer in English Literature at Queen Mary University of London. He is the author of Empire of Tea: The Asian Leaf that Conquered the World (2015, with Markman Ellis and Matthew Mauger), as well as the editor of Tea in Natural History and Medical Writing (2010). Dr Coulton has published journal articles on sociability, natural history, and horticulture in eighteenth-century London. He was previously a Fellow in Garden and Landscape Studies at the Dumbarton Oaks Research Library and Collection (Washington D.C.), an institute of Harvard University.
Dr Matthew Mauger is a lecturer in English at Queen Mary University of London. He researches literature of the long-eighteenth century, focusing in particular on how Enlightenment legal debate forms an important context for artistic production in the period. Another aspect of Matthew's research focuses on legal and commercial innovation, mercantile life, and the history of the civic institutions of the City of London. He has published articles on Blake’s legislative architecture, the literature of penal transportation, and the Corporation of London courts. He was the editor of Tea, Commerce and the East India Company (2010), and an author of Empire of Tea: The Asian Leaf that Conquered the World (2015).
Christopher Reid works on eighteenth-century literature and history, with a focus on political writing and oratory in that period. His first book, Edmund Burke and the Practice of Political Writing (1985), examined Burke's rhetoric in the context of contemporary political controversy. In Eighteenth-Century Popular Culture: A Selection (2000), which he edited with John Mullan, he examined cultural interactions between the elite and popular spheres. His most recent book is Imprison'd Wranglers: The Rhetorical Culture of the House of Commons 1760-1800 (2012), which looks at speakers, speeches, and their dissemination through print in parliamentary oratory's golden age.