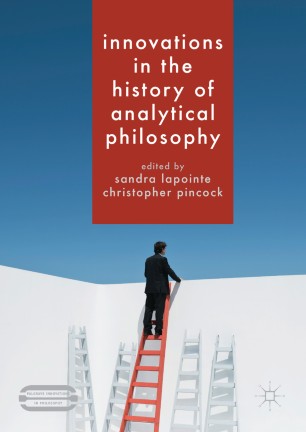 Innovations in the History of Analytical Philosophy

This book offers new perspectives on the history of analytical philosophy, surveying recent scholarship on the philosophical study of mind, language, logic and reality over the course of the last 200 years. Each chapter contributes to a broader engagement with a wider range of figures, topics and disciplines outside of philosophy than has been traditionally associated with the history of analytical philosophy. The book acquaints readers with new aspects of analytical philosophy’s revolutionary past while engaging in a much needed methodological reflection. It questions the meaning associated with talk of 'analytic' philosophy and offers new perspective on its development. It offers original studies on a range of topics – including in the philosophy of language and mind, logic, metaphysics and the philosophy of mathematics – and figures whose relevance, when they is not already established as in the case of Russell, Moore and Wittgenstein, are just now beginning to become the topic of mainstream literature: Franz Brentano, William James, Susan Langer as well as the German and British logicians of the nineteenth century.

Sandra Lapointe is Associate Professor of Philosophy at McMaster University, Canada. A Commonwealth Alumna and a Fellow of the Humboldt Foundation, she has published dozens of books and a number of articles and book chapters on a variety of topics in the history of nineteenth and twentieth century philosophy of logic, language and mind. She is a Founding Associate Editor of the Journal for the History of Analytical Philosophy and the founding President of the Society for the Study of the History of Analytical Philosophy.