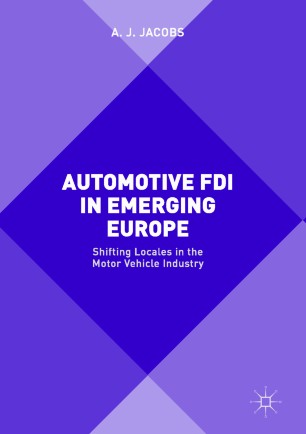 This book examines the dramatic increase in automotive assembly plants in the former Socialist Central European (CE) nations of Czechia, East Germany, Hungary, Poland, and Slovakia from 1989 onwards. Enticed by relatively lower-wage labour and significant government incentives, the world’s largest automakers have launched more than 20 passenger car assembly complexes in CE nations, with production accelerating dramatically since 2001. As a result, the annual passenger car production in Western Europe declined by more than 20% between 2001 and 2015, and alternatively in the CEE it increased by nearly 170% during this period. Drawing on case studies of 25 current and former foreign-run assembly plants, the author presents a rare historical account of automotive foreign assembly plants in the CE following this dramatic geographic shift. This book will expand the knowledge of policy-makers in Europe in relation to their pursuits of FDI and will be of great interest to scholars and students of business, economic history, political science, and development.

A. J. Jacobs is Associate Professor at East Carolina University’s Department of Sociology, USA. He has been a Visiting Fellow at Brussels Centre for Urban Studies, Belgium, and with the Faculty of Business Administration at Hosei University, Japan. Jacobs has published more than 30 scholarly articles, chapters, and books on regional development issues in North America, Europe, and East Asia, focusing upon the automotive industry, including The ‘New Domestic’ Automakers in the U.S. and Canada: History, Impacts, and Prospects (2016).

“A meticulously researched history of the car industry in East-Central Europe up to the present.” (Petr Pavlinek, Professor, Department of Geography and Geology, University of Nebraska Omaha, USA)
Buy options