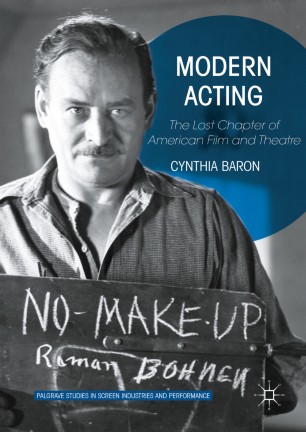 The Lost Chapter of American Film and Theatre

Everyone has heard of Method acting . . . but what about Modern acting? This book makes the simple but radical proposal that we acknowledge the Modern acting principles that continue to guide actors’ work in the twenty-first century. Developments in modern drama and new stagecraft led Modern acting strategies to coalesce by the 1930s – and Hollywood’s new role as America’s primary performing arts provider ensured these techniques circulated widely as the migration of Broadway talent and the demands of sound cinema created a rich exchange of ideas among actors.
Decades after Strasberg’s death in 1982, he and his Method are still famous, while accounts of American acting tend to overlook the contributions of Modern acting teachers such as Josephine Dillon, Charles Jehlinger, and Sophie Rosenstein. Baron’s examination of acting manuals, workshop notes, and oral histories illustrates the shared vision of Modern acting that connects these little-known teachers to the landmark work of Stanislavsky. It reveals that Stella Adler, long associated with the Method, is best understood as a Modern acting teacher and that Modern acting, not Method, might be seen as central to American performing arts if the Actors’ Lab in Hollywood (1941-1950) had survived the Cold War.

Cynthia Baron is the author of Denzel Washington (2015), and co-author of both Appetites and Anxieties: Food, Film, and the Politics of Representation (2014) and Reframing Screen Performance (2008). She is the co-editor of More Than a Method (2004), a professor in theatre and film at Bowling Green State University, and editor of the Palgrave Studies in Screen Industries and Performance series.

“Modern Acting offers a valuable new and expansive history of American acting theory and practice. Moving beyond “the Method,” Cynthia Baron identifies an alternative theatrical “throughline,” tracing modern acting from stage to screen, coast to coast, and past to present, while meaningfully illuminating the contributions of “lost” practitioners and institutions.” (Rosemary Malague is the director of the Theatre Arts Program at the University of Pennsylvania)

“Cynthia Baron, perhaps our foremost historian of screen acting, revises many misconceptions concerning American acting in the decades before the Method caught the public imagination in the 1950s and afterwards. By restoring Modern Acting to its rightful place in the life cycle of American acting in the 20th century, Baron indeed recreates a "lost chapter." In the process, she greatly sharpens our sometimes blurred understanding of how actors create their characters, often guided by unseen hands. Anyone interested in the evolution of American film acting needs to read this exceptional book.” (Dennis Bingham, Professor and Director of Film Studies, Indiana University-Purdue University Indianapolis)