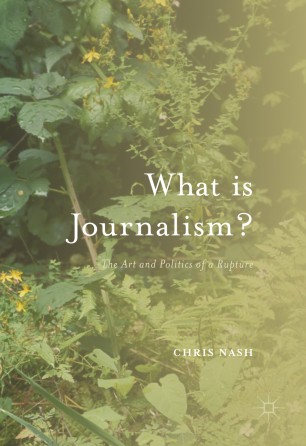 The Art and Politics of a Rupture

This book argues that journalism should treat itself as an academic discipline on a par with history, geography and sociology, and as an art form in its own right. Time, space, social relations and imagination are intrinsic to journalism. Chris Nash takes the major flaws attributed to journalism by its critics—a crude empiricism driven by an un-reflexive ‘news sense’; a narrow focus on a de-contextualised, transient present; and a too intimate familiarity with powerful sources—and treats them as methodological challenges. Drawing on the conceptual frameworks of Pierre Bourdieu, David Harvey, Henri Lefebvre, Michel-Rolph Trouillot and Gaye Tuchman, he explores the ways in which rigorous journalism practice can be theorised to meet these challenges.
The argument proceeds through detailed case studies of work by two leading iconoclasts—the artist Hans Haacke and the 20th century journalist I.F. Stone. This deeply provocative and original study concludes that the academic understanding of journalism is fifty years behind its practice, and that it is long past time for scholars and practitioners to think about journalism as a disciplinary research practice.
Drawing on an award-winning professional career and over three decades teaching journalism practice and theory, Chris Nash makes these ideas accessible to a broad readership among scholars, graduate students and thoughtful journalists looking for ways to expand the intellectual range of their work.