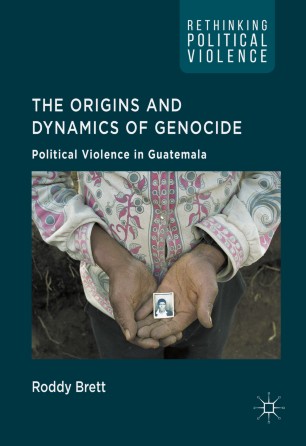 The Origins and Dynamics of Genocide:

This book rigorously documents and explains the genocide perpetrated by the Guatemalan state against indigenous Maya populations within the context of its counterinsurgency campaign against leftist guerrillas between 1981 and 1983. In doing so it brings to light a genocide that has remained largely invisible within both academic disciplines and the practitioner sphere.

In May 2013, former de facto president of Guatemala, General Efrain Rios Montt, was for ten days indicted for genocide and crimes against humanity within Guatemala’s domestic courts. Based upon over a decade of ethnographic research, including in survivors’ communities in Guatemala, this book documents the historical processes shaping the genocide by analysing the evolution of both counterinsurgent and insurgent violence and strategy, focusing above all on its impact upon the civilian population. The research clearly evidences the impact of political violence upon non-combatants; how military and insurgent strategies gradually implicate civilians in conflict and the strategies civilians may adopt in order to survive them. Convincingly framed within key theoretical scholarship from genocide studies and comparative politics it speaks to a broad audience beyond Latin Americanists.