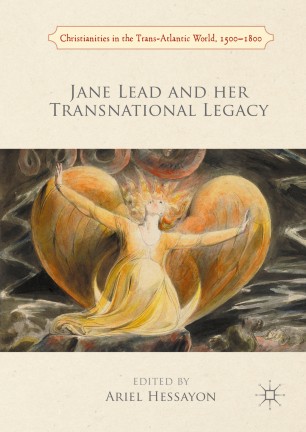 Jane Lead and her Transnational Legacy

This book concerns one of early modern England’s most prolific female authors, Jane Lead (1624–1704).  Well-researched and clearly written, these essays focus on aspects of Lead’s thought including her attitudes towards Calvinism, mysticism, androgyny and the apocalypse, her role within the Philadelphian Society, and her transnational legacy - particularly in the German-speaking world and North America.

This book suggests that Lead was far more radical than has been supposed. It argues that her religious journey had staging posts, namely an initial Calvinist obsession with sin and predestination wedded to a conventional Protestant understanding of the coming apocalypse, then the introduction of Jacob Boehme’s teachings and accompanying visions of a female personification of divine wisdom and finally, the adoption of the doctrine of the universal restoration of all humanity.  It locates Lead within a continuing tradition of puritan pastoral thought, showing how her personalised view of the millennium differed from most of her contemporaries and discussing her influence on Pietists and their conceptions of bodily transmutation. It also discusses strategies available to female authors and manuscript circulation as an alternative to print and examines her initial continental reception, particularly within Pietist and Spiritualist circles.  Lastly, it traces her afterlife through the relationship between the Philadelphians and the French Prophets, the interest in Lead among the followers of Joanna Southcott and her successors, and the appropriation of Lead’s prophecies by two twentieth century movements: Mary’s City of David and the Latter Rain movement.

Ariel Hessayon is Senior Lecturer in the Department of History at Goldsmiths, University of London, UK.  He is the author of ‘Gold tried in the fire’: The prophet TheaurauJohn Tany and the English Revolution (2007) and the co-editor of several collections of essays.  He has also written extensively on a variety of early modern topics: antiscripturism, book burning, communism, environmentalism, esotericism, extra-canonical texts, heresy, crypto-Jews, Judaizing, millenarianism, mysticism, prophecy, and religious radicalism.

“The collection originated in a conference, and Hessayon has preserved a sense of collaborative, dialogic, and supportive discussion throughout these chapters. Each chapter is generously footnoted and, where relevant, includes appendices, tables, and data that invite further enquiry. The breadth of research, historical and literary analysis, and the generous inclusion of data and references provide a thorough introduction to new students of Lead’s life and times that should inspire further investigation and inquiry.” (Kaley Kramer, Early Modern Women Journal, Vol. 13 (01), 2018)
Buy options