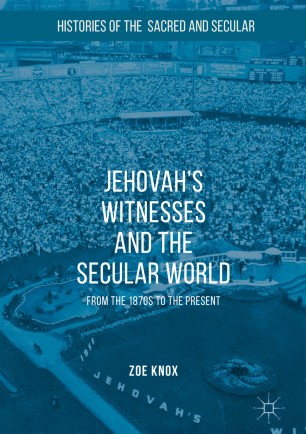 Jehovah's Witnesses and the Secular World

This book examines the tensions between Jehovah’s Witnesses and government authorities, civic organisations, established churches and the broader public generated by the Watch Tower Society’s teachings. Witnesses originated in the 1870s as small, loose-knit groups calling themselves Bible Students. Today, there are some eight million Witnesses worldwide, all actively engaged in evangelism. The author analyses issues that have brought them global visibility and even notoriety, including political neutrality, public ministry, blood transfusion, and anti-ecumenism.  It also explores anti-Witness campaigns, from media portrayals of the community as marginal and exotic to the anti-cult movement.  Focusing on varied historical, ideological and national contexts, the book argues that Witnesses have had a defining influence on conceptions of religious tolerance in the modern world.

Zoe Knox is Associate Professor of Modern Russian History at the University of Leicester, UK.

“For the past few decades, the landmark books on Jehovah’s Witnesses have largely been written by ex-members. Zoe Knox’s impartial, scholarly, and rigorous account of the Watch Tower organisation comes as a welcome contrast, providing useful and illuminating analysis of the Society’s position on several key themes.” (George D. Chryssides, Honorary Research Fellow at York St John University, UK, and author of Historical Dictionary of Jehovah’s Witnesses and Jehovah’s Witnesses: Continuity and Change)

“Zoe Knox offers an ambitious study of Jehovah’s Witnesses from Malawi to the Soviet Union. This balanced examination of how minority faiths interact with modern states and societies is a valuable contribution to scholarship on religious tolerance and freedom of conscience, and a must-read for scholars of this religious community.” (Emily B. Baran, Assistant Professor, Middle Tennessee State University, USA, and author of Dissent on the Margins: How Soviet Jehovah’s Witnesses Defied Communism and Lived to Preach About It)