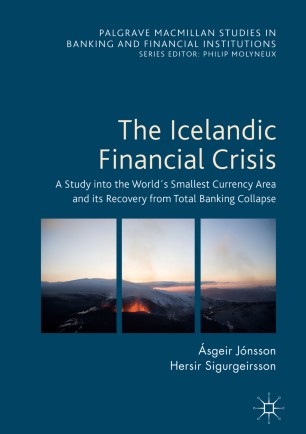 This book presents a detailed account of Iceland’s recovery from the tumultuous banking collapse that overturned its financial industry in 2008. Early chapters recount how Iceland’s central bank was unable to follow the quantitative easing policies of the time to print money and save the banks, while serving the world´s smallest currency area. The book goes on to explore how the government exercised force majeure rights to implement emergency legislation aimed at preventing the “socialization of losses”. Later chapters investigate how, eight years later, these policies have yielded renewed growth and reinvigorated liquidity streams for the financial system. The authors argue that Iceland, long-called the ‘canary in the coal mine’ of the developed world, offers important lessons for the future. This book will be useful to all readers interested in better understanding the unique history of Iceland’s banking crisis and the phenomena of its recovery.

Ásgeir Jónsson is Associate Professor of Money and Banking and Chair of the Department of Economics at the University of Iceland. In 2004, he became the Chief Economist and Head of Research at Kaupthing Bank, then the largest bank in Iceland. After the banking collapse in 2008, he continued at his post at the Arion Bank, the restored domestic arm of Kaupthing, before accepting his current position at the University of Iceland in 2011. Ásgeir is the author of several books and numerous articles on topics ranging from banking and finance, spatial economics, to economic history and literature. He has also written several books about the Icelandic economy, among them a book about the Icelandic banking collapse of 2008 entitled, Why Iceland? (McGraw-Hill Education, 2009).

Hersir Sigurgeirsson is Associate Professor of Finance at the School of Business at the University of Iceland. From 2003 to 2006, he was employed in risk management and then proprietary trading at Kaupthing Bank, Iceland, before joining Saga Capital Investment Bank in Akureyri as the Managing Director of Risk Management. Hersir has written extensively on finance as well as undertaking advisory work for organizations such as the World Bank. He received an M.Sc. in Financial Mathematics from Stanford University, US, in 1999 and a Ph.D. in Applied and Computational Mathematics from the same school in 2001.