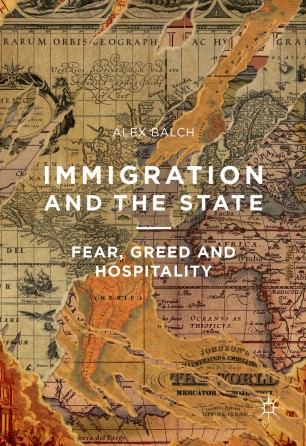 Immigration and the State

This book examines how and why liberalism and human rights have proven insufficient to protect immigrants. Contemporary immigration systems are characterized by increasing complexity and expanding enforcement, and frequently criticized for violating human rights and for causing death, exclusion and exploitation. The ‘migrant crisis’ can also be understood as a crisis of hospitality for liberal democracies. Through analysis of the immigration histories and political dynamics of Britain and the US, the book explains how these two archetypal liberal states have both sought to create a hostile environment for unwanted immigrants. The book provides a fresh and original perspective on the development of immigration systems, showing how they have become subject to the politics of fear and greed, and revealing how different traditions of hospitality have evolved, survived, and renewed.
Alex Balch is Senior Lecturer at the University of Liverpool, UK. His work focuses on the politics and policy of immigration, and efforts to combat forced labour and human trafficking. He has worked with a range of government and non-government organisations on research projects and regularly contributes to public debates. He is a member of the Forced Labour Monitoring Group (FLMG).