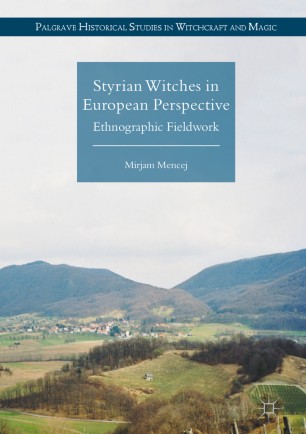 The book provides a comprehensive exploration of witchcraft beliefs and practices in the rural region of Eastern Slovenia. Based on field research conducted at the beginning of the twenty-first century, it examines witchcraft in the region from folkloristic, anthropological, as well as historical, perspectives. Witchcraft is presented as part of social reality, strongly related to misfortune and involved in social relationships. The reality of the ascribed bewitching deeds, psychological mechanisms that may help bewitchment to work, circumstances in which bewitchment narratives can be mobilised, reasons for a person to acquire a reputation of the witch in the entire community, and the role that unwitchers fulfilled in the community, are but a few of the many topics discussed. In addition, the intertwinement of social witchcraft with narratives of supernatural experiences, closely associated with supernatural beings of European folklore, forming part of the overall witchcraft discourse in the area, is explored.

Mirjam Mencej is Professor of Folkloristics at the University of Ljubljana, Slovenia. She has published numerous papers and six monographs on folklore and vernacular religion.

“I would like to emphasise this as being particularly valuable – the today’s stage of belief in witch phenomena and has already been particularly well-received by the profession – especially as regards folkloristics, ethnology and cultural anthropology, not only among Slovenian scholars, but also in the broad region of the former-Yugoslav countries … .” (Suzana Marjanić, FABULA - Zeitschrift für Erzählforschung, Vol. 60 (1-2), 2019)
“Mencej’s study combines discussion of these broad, theoretical issues with the concrete level of everyday perceptions of magical harm described by her interviewees. … Thorough, learned and surprising at many turns, this is an important work on the persistence of traditional, even archaic, magical and witch beliefs into the present.” (Mary R. O’Neil, europenowjournal.org, July, 2018)
Buy options