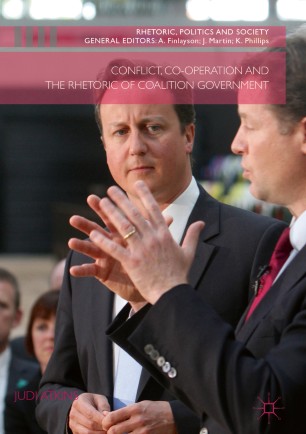 Conflict, Co-operation and the Rhetoric of Coalition Government

Through a rhetorical analysis, this book explores how the parties in a coalition government create a united public front while preserving their distinct identities. After proposing an original framework based on the ‘new rhetoric’ of Kenneth Burke, the author charts the path from the inconclusive outcome of the 2010 UK general election and the formation of the Conservative-Liberal Democrat coalition to the dissolution of the partnership in the run-up to May 2015. In doing so, she sheds valuable light on the parties’ use of rhetoric to manage the competing dynamics of unity and distinctiveness in the areas of higher education, constitutional reform, the Europe Union and foreign policy. This unique and highly-accessible analysis will be of interest to a wide audience, including scholars and students of rhetoric, British politics and coalition studies.