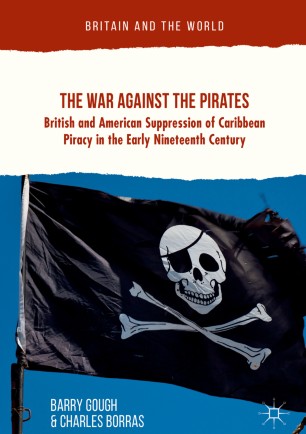 The War Against the Pirates

Based on hitherto unused sources in English and Spanish in British and American archives, in this book naval historian Barry Gough and legal authority Charles Borras investigate a secret Anglo-American coercive war against Spain, 1815-1835. Described as a war against piracy at the time, the authors explore how British and American interests – diplomatic and military – aligned to contain Spanish power to the critically influential islands of Cuba and Puerto Rico, facilitating the forging of an enduring but unproclaimed Anglo-American alliance which endures to this day.

Due attention is given to United States Navy actions under Commodore David Porter, to this day a subject of controversy.  More significantly though, through the juxtaposition of British, American and Spanish sources, this book uncovers the roots of piracy – and suppression– that laid the foundation for the tortured decline of the Spanish empire in the Americas and the subsequent rise of British and American empires, instrumental in stamping out Caribbean piracy for good.

Barry Gough is a Fellow of Kings College London, UK. A noted authority on British sea power, he is the author of twenty books on the maritime foundations of imperial history, and has won the Mountbatten Literary Award for Pax Britannica: Ruling the Waves and Keeping the Peace Before Armageddon (2014). Past president of the North American Society for Oceanic History, he was editor of The American Neptune: Maritime History & Arts.

Charles Borras is a lawyer who also holds a Masters degree in Political Science from the University of Waterloo, Canada and a Masters degree in Business Administration from Wilfrid Laurier University.  He graduated from the University of Ottawa Faculty of Law in 1993 and was called to the Ontario Bar in 1995.  He later worked in the House of Commons of Canada as Special Assistant to the Member of Parliament for Kitchener-Waterloo from 1998 to 2001.  Charles published an article, “Video Surveillance in the Ontario Workplace,” with Dr Franklin Ramsoomair in 2005.