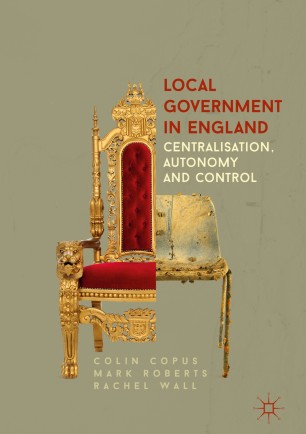 The book explores the claim that English local government exists in one of the most centralised relationships with national government. Such a position fundamentally undermines any notion of local self-government and makes the term ‘government’ in local government a misnomer. The book will examine how the erosion of the autonomy, powers, roles, functions and responsibilities of English local government came about, the arguments of centralisers and localisers to support their view of the constitutional status of local government, and its overall role in the government of England. The book offers an antidote to the onward march of centralisation by offering a new vision of local government which emphasises both ‘local’ and ‘government’.
Professor Colin Copus is Director of the Local Governance Research Unit and Professor of local politics within the Department of Politics and Public Policy, De Montfort University. His academic interests are central-local relationships, local party politics, local political leadership and the role of the councillor. Colin has worked with policy-makers and practitioners in central and local government, was an advisor to the Political and Constitutional Reform Committee, and has worked with the Communities and Local Government Committee.
Dr Mark Roberts has been a Research Fellow and Lecturer at De Montfort University since 2008. His research interests are urban politics; partnership and neighbourhood governance; devolution; race, immigration and faith in politics; and, managing organisational change. In 2013 Mark published his first book in co-authorship with Professor Vivien Lowndes: ‘Why Institutions Matter: The New Institutionalism in Political Science’ in the Palgrave Macmillan Political Analysis series.
Rachel Wall is PhD Researcher in the Local Governance Research Unit within the Department of Politics and Public Policy, De Montfort University; the subject of her research is devolution to English local government. She graduated from De Montfort University in 2014 having completed a degree in Government & Politics. She then went on to work as a development officer in local government and served as a parish councillor. She is also currently a researcher for the De Montfort University and Municipal Journal Councillor Commission.