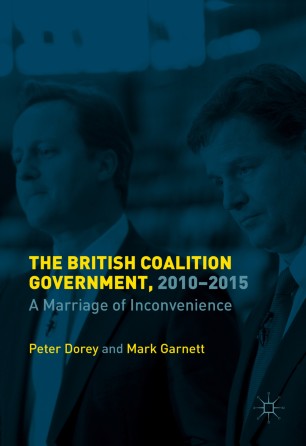 A Marriage of Inconvenience

This book examines the formation and operation of the Conservative and Liberal Democrat coalition government from May 2010 to May 2015. The authors outline the factors that enabled the union, including economic circumstances, parliamentary politics, the initially amicable relationship established between David Cameron and Nick Clegg, and the apparent ideological closeness of Conservative modernisers and Orange Book Liberal Democrats. The authors then analyse how these factors shaped the policy agenda pursued over the five years, including the issues of deficit reduction, public sector reform, and welfare reduction, before discussing the tensions that developed as a result of these decisions. Ultimately, relations between the coalition partners steadily became less amicable and more acrimonious, as mutual respect gave way to mutual recrimination.

Mark Garnett is Senior Lecturer in Politics and International Relations at Lancaster University, UK. He is the author of numerous books and articles on British Politics.