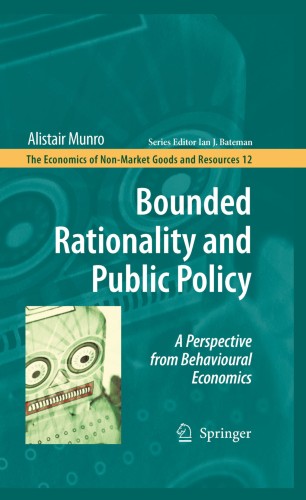 A Perspective from Behavioural Economics

Part of the The Economics of Non-Market Goods and Resources book series (ENGO, volume 12)

The economist’s advice to society rests largely on a picture of citizens as infinitely rational beings, shrewd, calculating and above all consistent in their behaviour. But as the last thirty years of economic experiments and field work has revealed, humans are far from perfectly consistent. On the contrary, choices and preferences often seem highly sensitive to context. Systematic deviations from rationality – "anomalies" are widespread and they have been well-documented in the laboratory and the field. What then can the economist say about desirable public policies?

Bounded Rationality and Public Policy brings together the work of experimental economists and applies it to public economics. Experimental evidence on anomalies such as the endowment effect, anchoring and mental accounts is presented and critically appraised. The implications of bounded rationality for the efficient boundaries of the state are considered. The author argues that in general bounded rationality does not imply a larger optimal role for the state and indeed the converse may be true. New kinds of policies based on the framing and labeling of choices are discussed and their impact is analysed. The author also considers optimal tax and benefit policy and the best role for stated preference and other methods widely employed in non-market valuation.

Throughout this Work, the emphasis is on using models of human behaviour that are well-grounded in empirical evidence. The author shows that even when behaviour is not fully rational, economists have much to say about the design of public policy.