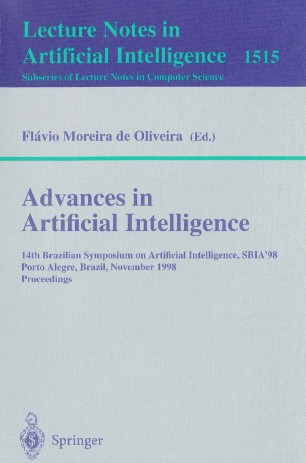 The Brazilian Symposium on Artificial Intelligence (SBIA) has been organized by the Interest Group on Artificial Intelligence of the Brazilian Computer Society (SBC) since 1984. In order to promote research in Artificial Intelligence and scientific interaction among Brazilian AI researchers and practitioners, and with their counterparts worldwide, it is being organized as an international forum since 1993. The SBIA proceedings have been published by Springer-Verlag as a part of the Lecture Notes in Artificial Intelligence (LNAI) series since 1995. The XIVth SBIA, held in 1998 at the PUCRS Campus in Porto Alegre, has maintained the international tradition and standards previously established: 61 papers were submitted and reviewed by an international program committee, from this number, 26 papers were accepted and are included in this volume. Of course, organizing an event such as SBIA demands a lot of group effort. We would like to thank and congratulate all the program committee members, and the many reviewers, for their work in reviewing and commenting on the submitted papers. We would also like to thank the Pontifical Catholic University of Rio Grande do Sul, host of the XIV SBIA, and the institutions which sponsored it - CNPq, CAPES, BANRISUL, among others. Last but not least, we want to thank all the kind people of the Local Organizing Committee, whose work made the event possible.