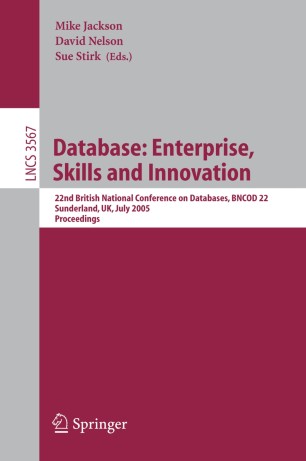 The British National Conference on Databases (BNCOD) was established in 1980 as a forum for research into the theory and practice of databases. The original conference in the series took place at the University of Aberdeen. To be precise, this conference was in fact entitled ICOD which stood for International Conference on Databases. It was the intention, when the series began, that an ICOD would take place every two years, whilst a BNCOD would run in the years in between. As the record shows ICOD was only held in 1980 and 1983. The more junior conference has managed to acquire a lifetime much longer than that of its senior relative! If truth wereknown,however,BNCOD has,overthe years,growninto ICOD and although the conference is still titled “British National,” it is, in fact, an international conference that takes place on a yearly basis. Proof of this can be obtained simply by looking at the table of contents of these proceeding which clearlyshowthatthe majorityofpaperspresentedatthis year’sconferencecame from contributors whose a?liations are outside the UK. Despitetherangeofpapersono?er,BNCODstillretainsitsuniquelyBritish ?avor. The Programme Committee is drawn from UK academics and the c- ference is always held at a British university (or in earlier years a polytechnic!).