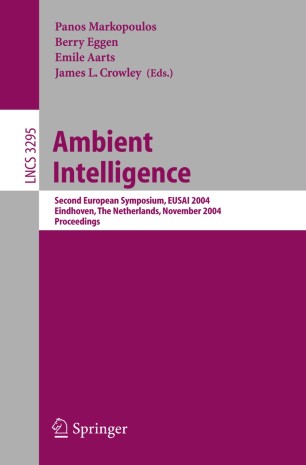 This volume of the LNCS is the formal proceedings of the 2nd European Symposium on Ambient Intelligence, EUSAI 2004. This event was held on November 8–10, 2004 at the Eindhoven University of Technology, in Eindhoven, the Netherlands. EUSAI 2004 followed a successful first event in 2003, organized by Philips Research. This turned out to be a timely initiative that created a forum for bringing together European researchers, working on different disciplines all contributing towards the human-centric technological vision of ambient intelligence. Compared to conferences working on similar and overlapping fields, the first EUSAI was characterized by a strong industrial focus reflected in the program committee and the content of the program. As program chairs of EUSAI 2004 we tried to preserve the character for this event and its combined focus on the four major thematic areas: ubiquitous computing, context awareness, intelligence, and natural interaction. Further, we tried to make EUSAI 2004 grow into a full-fledged double-track conference, with surrounding events like tutorials and specialized workshops, a poster and demonstration exhibition and a student design competition. The conference program included three invited keynotes, Ted Selker from MIT, Tom Rodden from the University of Nottingham and Tom Erickson from IBM.