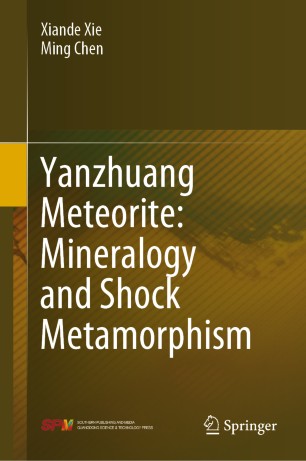 This book investigates the mineralogy and shock effects of Yanzhuang chondrite, using modern micro-mineralogical experimental techniques, including SEM, TEM, EPMA, Raman microprobe spectroscopy, instrumental neutron activation analysis, X-ray micro-diffraction analysis, micro-PIXE analysis and laser ablation ICP-MS. The micro-structural and micro-morphological characteristics as well as chemical composition of minerals were studied in details. Based on the studies in the shock effects of rocks and minerals, and the detailed study in the shock-produced melt, the book concludes that Yanzhuang chondrite is the most heavily shocked ordinary H group chondrite ever found and that it contains the most abundant shock induced melt among all known shock-melt-bearing chondritic meteorites.

Professor Xie is the winner of two China National Natural Science Awards and 13 Awards for Advancement of Science and Technology given by Chinese Academy of Sciences or related Provincial Governments. The book entitled “Mineralogical Approaches to Geological Investigations” written by Edward C. T. Chao and Xiande Xie was awarded the Branch Best Paper of Geological Division, US Geological Survey, in 1990.
He was the President of International Mineralogical Association for 1990 to 1994. His honorary titles also include: Foreign Member of Russian Academy of Sciences (since 1994), Academician of International Eurasian Academy of Sciences (since 2001), Honorary Member of the Mineralogical Society of Russia (since 1991), Honorary Member of the Romanian Association of Scientists (since 1992) and Honorary President of Guangdong Provincial Association for Science and Technology (since 2002).

Professor Ming Chen has been working at Guangzhou Institute of Geochemistry, Chinese Academy of Sciences since 1993, his research area covers cosmic mineralogy, high pressure mineralogy, shock metamorphism, meteorite craters and so on. He is the discoverer of Xiuyan impact crater, the first meteorite impact crater ever found in China, as well as the discoverer of shock-produced new high-pressure minerals tuite, xieite, maohekite, and the CF-phase. Professor Chen was awarded the Wuyi Labor Medal of Guangdong Province in 2004, National Excellent Science and Technology Workers by China Association for Science and Technology in 2010. He is also the winner of three first-grade Science and Technology Awards given by Guangdong Provincial Government in 1995, 2002, and 2017.