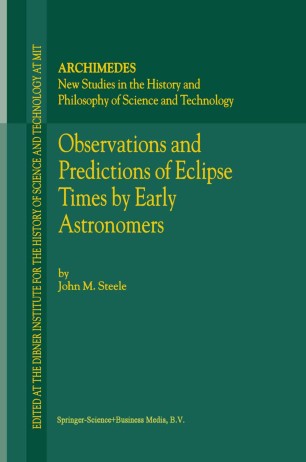 Eclipses have long been seen as important celestial phenomena, whether as omens affecting the future of kingdoms, or as useful astronomical events to help in deriving essential parameters for theories of the motion of the moon and sun. This is the first book to collect together all presently known records of timed eclipse observations and predictions from antiquity to the time of the invention of the telescope. In addition to cataloguing and assessing the accuracy of the various records, which come from regions as diverse as Ancient Mesopotamia, China, and Europe, the sources in which they are found are described in detail. Related questions such as what type of clocks were used to time the observations, how the eclipse predictions were made, and how these prediction schemes were derived from the available observations are also considered. The results of this investigation have important consequences for how we understand the relationship between observation and theory in early science and the role of astronomy in early cultures, and will be of interest to historians of science, astronomers, and ancient and medieval historians.

`The book is lucidly written and well organized, and contains just the right amount of background in general and astronomical history to orient non-specialist readers.'
Annals of Science, 58(2001)