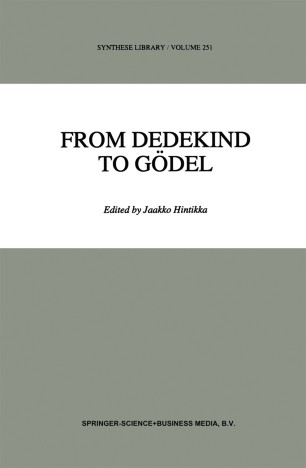 Essays on the Development of the Foundations of Mathematics

Discussions of the foundations of mathematics and their history are frequently restricted to logical issues in a narrow sense, or else to traditional problems of analytic philosophy. From Dedekind to Gödel: Essays on the Development of the Foundations of Mathematics illustrates the much greater variety of the actual developments in the foundations during the period covered. The viewpoints that serve this purpose included the foundational ideas of working mathematicians, such as Kronecker, Dedekind, Borel and the early Hilbert, and the development of notions like model and modelling, arbitrary function, completeness, and non-Archimedean structures. The philosophers discussed include not only the household names in logic, but also Husserl, Wittgenstein and Ramsey. Needless to say, such logically-oriented thinkers as Frege, Russell and Gödel are not entirely neglected, either.
Audience: Everybody interested in the philosophy and/or history of mathematics will find this book interesting, giving frequently novel insights.