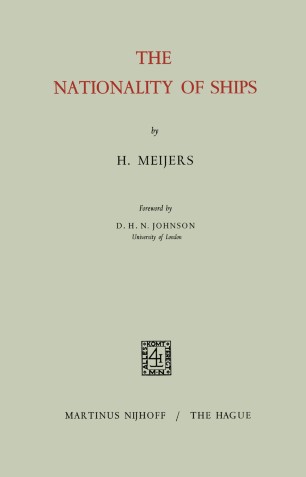 The Nationality of Ships

It gives me great pleasure to introduce this work by Dr. H. Meyers. The problem of "The Nationality of Ships" has long been one of the most difficult problems in the international law of the sea. It has been made more acute recently by the growth of "flags of convenience". Legally, the problem has been complicated or simplified-according to one's point of view-by the emergence of the concept of the "genuine link" associated with the Judgment of the International Court of Justice in the Nottebohm case (second phase) in 1955. Other develop­ ments have included the thorough preparatory work of the Internation­ al Law Commission leading up to the United Nations Conference on the Law of the Sea, held in Geneva in 1958; the debates at that Con­ ference and particularly its adoption of the Convention on the High Seas; and finally the Advisory Opinion of the International Court of Justice in the case concerning the Constitution of the Maritime Safety Committee of the Inter-Governmental Maritime Consultative Organisation in 1960. All these developments have thrown light on the problem ofthe allocation of ships to one or other of the politically organised territorial communities (or States) of which the present international society is largely composed. But an agreed solution acceptable to all the interests concerned seems as far away as ever. The question of ships operated by international institutions such as the United Nations is another problem which awaits a satisfactory answer.