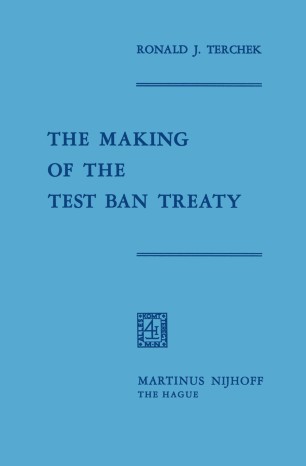 Eighteen years after the United States presented its plan for the international control of atomic energy to the United Nations, the first major arms control agreement was signed between the United States and the Soviet Union. Including Great Britain, the three major nuclear powers pledged to refrain from nuclear tests in the atmosphere, outer space, and underwater in a treaty negotiated in Moscow within two weeks during the summer of 1963. It was hoped that the treaty would at least discourage those phases of the arms race which required large-yield nuclear explosions in the atmosphere or outer space as well as eliminate further radioactive pollution of the atmos­ phere. In addition, the test ban would discourage, though not eliminate, the development of nuclear weapons by other treaty adherents because the un­ derground testing allowed under the terms of the document would escalate already heavy costs for countries intending to conduct their first nuclear tests. The Kennedy administration expected other agreements to follow the test ban treaty, particularly an agreement to keep outer space free from 1 nuclear warheads and to outlaw underground tests in the near future. But one of the most important anticipated benefits of the treaty was the expected improvement of relations between the United States and the Soviet Union. The treaty was important not only because it was a tangible breakthrough in East-West arms-control negotiations but also because of its implications for domestic and international politics.