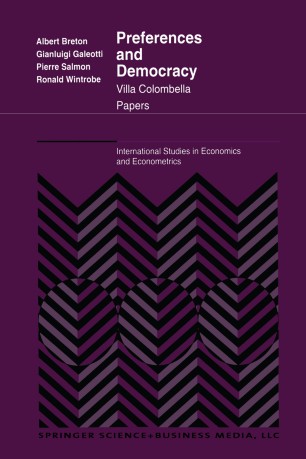 Part of the International Studies in Economics and Econometrics book series (ISEE, volume 28)

I. Until about a dozen years ago, the economic analysis of the relationship between political preferences and political demands was a rather straightforward, if dull, subject. The most common assumption was that the only political instrument available to citizens was the vote. Given this assumption, the analyst could express the outcome of the voting process in one of two ways. One possibility was to make the heroic assumptions necessary to obtain the median voter theorem, in which case, the political demands of the citizenry are simply the preferences of the median voter. The alternative was to make Arrow's Impossibility Theorem in which case even though individual preferences are well ordered, no collective preference function exists. On either of these approaches, institutions such as interest groups, political parties, or the structures ofpolitical representation played no role in the analysis. The work of "Chicago" scholars especially George Stigler, Gary Becker and Sam Peltzman took a different approach and emphasized the importanceoforganizationinmakingpoliticaldemandseffective, shifting thefocus from voting topolitical "pressure" byinterestgroups. However, in these models, voting as an instrument of political action simply disappears and the relationship between interest group pressures and electoral processes has never been clarified.