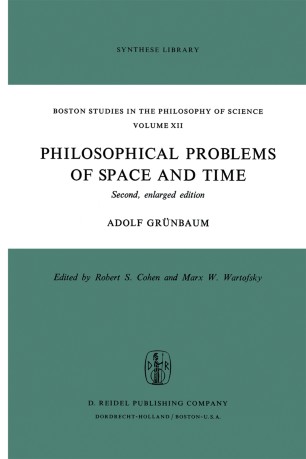 Philosophical Problems of Space and Time

Part of the Boston Studies in the Philosophy of Science book series (BSPS, volume 12)

It is ten years since Adolf Griinbaum published the first edition of this book. It was promptly recognized to be one of the few major works in the philosophy of the natural sciences of this generation. In part, this is so because Griinbaum has chosen a problem basic both to philosophy and to the natural sciences - the nature of space and time; and in part, this is so because he so admirably exemplifies that Aristotelian devotion to the intimate and mutual dependence of actual science and philosophical understanding. More than this, however, the quality of his work derives from his achievement in combining detail with scope. The problems of space and time have been among the most difficult in contemporary and classical thought, and Griinbaum has been responsible to the full depth and complexity of these difficulties. This revised and enlarged second edition is a work in progress, in the tradition of reflective analysis of modern science of such figures as Ehrenfest and Reichenbach. In publishing this work among the Boston Studies in the Philosophy of Science, we hope to contribute to and encourage that broad tradition of natural philosophy which is marked by the close collaboration of philoso­ phers and scientists. To this end, we have published the proceedings of our Colloquia, of meetings and conferences here and abroad, as well as the works of single authors.