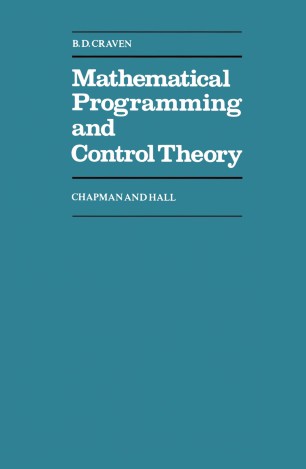 In a mathematical programming problem, an optimum (maxi­ mum or minimum) of a function is sought, subject to con­ straints on the values of the variables. In the quarter century since G. B. Dantzig introduced the simplex method for linear programming, many real-world problems have been modelled in mathematical programming terms. Such problems often arise in economic planning - such as scheduling industrial production or transportation - but various other problems, such as the optimal control of an interplanetary rocket, are of similar kind. Often the problems involve nonlinear func­ tions, and so need methods more general than linear pro­ gramming. This book presents a unified theory of nonlinear mathe­ matical programming. The same methods and concepts apply equally to 'nonlinear programming' problems with a finite number of variables, and to 'optimal control' problems with e. g. a continuous curve (i. e. infinitely many variables). The underlying ideas of vector space, convex cone, and separating hyperplane are the same, whether the dimension is finite or infinite; and infinite dimension makes very little difference to the proofs. Duality theory - the various nonlinear generaliz­ ations of the well-known duality theorem of linear program­ ming - is found relevant also to optimal control, and the , PREFACE Pontryagin theory for optimal control also illuminates finite dimensional problems. The theory is simplified, and its applicability extended, by using the geometric concept of convex cones, in place of coordinate inequalities.