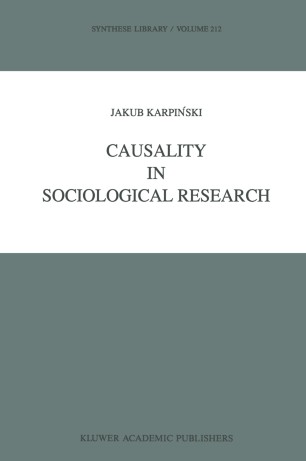 The general treatment of problems connected with the causal conditioning of phenomena has traditionally been the domain of philosophy, but when one examines the relationships taking place in the various fields, the study of such conditionings belongs to the empirical sciences. Sociology is no exception in that respect. In that discipline we note a certain paradox. Many problems connected with the causal conditioning of phenomena have been raised in sociology in relatively recent times, and that process marked its empirical or even so-called empiricist trend. That trend, labelled positivist, seems in this case to be in contradiction with a certain type of positivism. Those authors who describe positivism usually include the Humean tradition in its genealogy and, remembering Hume's criticism of the concept of cause, speak about positivism as about a trend which is inclined to treat lightly the study of causes and confines itself to the statements on co-occurrence of phenomena.