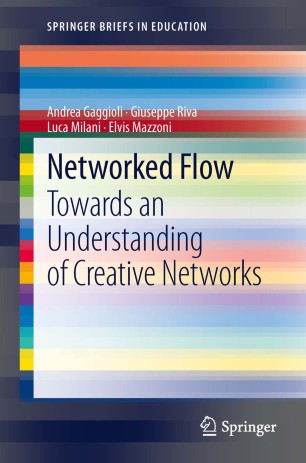 Towards an Understanding of Creative Networks

Identifying ‘networked flow’ as the key driver of networked creativity, this new volume in the Springer Briefs series deploys concepts from a range of sub-disciplines in psychology to suggest ways of optimizing the innovative potential of creative networks. In their analysis of how to support these networks, the contributing authors apply expertise in experimental, social, cultural and educational psychology. They show how developing a creative network requires the establishment of an optimal group experience in which individual intentions inform and guide collective goals.
The volume represents a three-fold achievement. It develops a ground-breaking new perspective on group creativity: the notion of ‘networked flow’ as a bridging concept linking the neuropsychological, psychological and social levels of the creative process. In addition, the authors set out a six-stage model that provides researchers with a methodological framework (also by referring to the social network analysis) for studying the creativity traditionally associated with interpersonal contexts. Finally, the book includes perceptive analysis of the novel possibilities opened up by second-generation internet technologies, particularly in social networking, that seem destined to develop and sustain online creativity. As a wide-ranging exposition of a new direction in theoretical psychology that is laden with exciting possibilities, this volume will inform and inspire professionals, scholars and students alike.