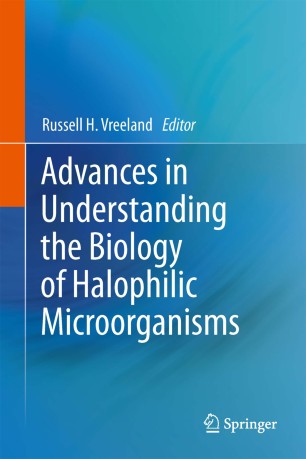 Advances in Understanding the Biology of Halophilic Microorganisms

Saline environments are one of the most plentiful and interesting types of habitats on Earth and are often considered as models for potential life on other planets or moons. The hypersaline playas, sabkhas, salterns, lakes, soils and even crystals often contain biomass that is far in excess of what might be predicted from the environmental conditions alone. The populations become so dense they color the brines and have been noticed by humanity since 2500 BC. In addition much of planet Earth is underlain by vast ancient salt deposits that may be thousands of meters thick and stretch for many kilometers. Even deep within the Earth’s crust there are vast reservoirs of saline water all of which contain salt loving microbes. These are not however simple terminal ecosystems. These saline habitats literally team with a complex web of life containing large populations of salt loving bacteria, archaea, algae, viruses and even fungi.  Halophilic microorganisms are one of the more fascinating microbial groups known today. Their ability to exist in exceptionally high salt (as NaCl) brines, soils and even in ancient halite provides a wide array of areas for physiological, ecological and molecular studies. Whenever media reports present something on salt loving microbes there is intense public interest and fascination. The scientists that begin to study halophiles never stop.

This book is an update of one originally published in 1992. Many of the topics covered are the same but others are new and reflect more modern approaches. This book is not a series of reviews of topics. It is more than that.