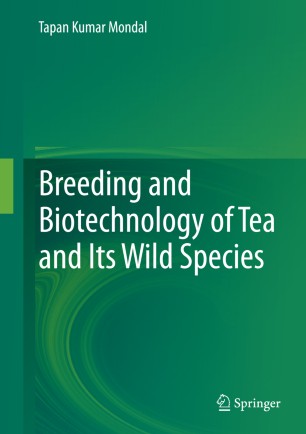 Breeding and Biotechnology of Tea and its Wild Species

Tea is an important non-alcoholic beverage plant of the world. Cultivation of tea is very important as it earns revenue for the tea growing nations especially the developing countries such as India. Although conventional breeding is well-established and has contributed significantly for varietal improvement of this plant and other Camellia species with ornamental value, yet applications of biotechnology are required to intervene some of the issues where conventional breeding is restricted particularly for woody plants such as tea. It is note-worthy to mention that some amounts of biotechnology works in several facets of tea and its wild species have also been done. In the present book, a state-of-the-art on various aspects of breeding and biotechnology has been compiled in eight chapters. These are: (i) Origin and description of health benefits as well as morphological classification as first chapter, (ii) Breeding and cytogenetics that comprise with various conventional approaches of varietal improvement of tea along with their genetic resources, (iii) Micropropagation which deals with in-depth study of clonal propagation, (iv) Somatic embryogenesis along with alternative techniques such as suspension culture, cry-preservation etc., (v) Molecular breeding that deals with application of various DNA-based markers, linkage map etc., (vi) Genetic transformation and associated factors, (vii) Stress physiology compiled with various works done in tea along with its wild relatives on abiotic as well as biotic stress, and (viii) Functional genomics that describe various works of molecular cloning and characterizations, differential gene expression, high-throughput sequencing, bioinformatics, etc. Importantly, the author has made exclusive tables in most of the chapters that include the summary of the works in particular topic. In a nutshell, the book compiles the work already been done, identifies the problems, analyzes the gaps on breeding and biotechnological works of tea as well as its wild species and discusses the future scope as conclusion. Every effort has been made to include all the published works till June 2013.

The book will be a useful resource for post-graduate, doctoral as well post-doctoral students working on tea as well as other woody plants. This will also be useful for the scientists working in the areas of life sciences, genomics, biotechnology and molecular biology.

Dr. Tapan Kumar Mondal joined at Institute of Himalayan Bioresource Technology (CSIR), Himachal Pradesh, India, for his Ph.D degree which he completed in 1998. After that, he served as Deputy Manager, Research and Development Department, Tata Tatley Ltd, Munnar, Kerala till March, 2002. Since then up to 2010, he further served as Assistant Professor at North Bengal Agricultural University, Cooch Behar, West Bengal. Later in February 2010, he joined as Senior Scientist (Plant Biotechnology) at National Bureau of Plant Genetic Resource (ICAR), New Delhi. He carried out his Post Doctoral training with Prof. J. K. Zhu of University of California, Riverside, USA, on ‘Regulation of small RNA under cold stress of Arabidopsis’ and later worked at University of Illinois, Urbana-Champaign, USA, on ‘Identification of nitrogen use efficient genes of maize by RNAseq’.

Dr. Mondal has significantly contributed in various areas of biotechnology and genetic resource management of tea. His work leads to develop the first transgenic tea plants. He has also submitted several gene sequences of tea at NCBI and also published more than 60 publications in this area. He was PI of various projects of tea biotechnology funded by DBT, DST, ICAR and Tea Board, India.