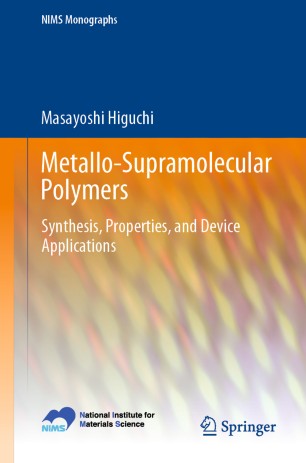 This book introduces the synthesis, electrochemical and photochemical properties, and device applications of metallo-supramolecular polymers, new kinds of polymers synthesized by the complexation of metal ions and organic ditopic ligands. Their electrochemical and photochemical properties are also interesting and much different from conventional organic polymers. The properties come from the electronic intra-chain interaction between the metal ions and the ligands in the polymer chain. In this book, for example, the electrochromism that the Fe(II)-based metallo-supramolecular polymer exhibits is described: the blue color of the polymer film disappears by the electrochemical oxidation of Fe(II) ions to Fe(III) and the colorless film becomes blue again by the electrochemical reduction of Fe(III) to Fe(II). The electrochromism is explained by the disappearance/appearance of the metal-to-ligand charge transfer absorption. The electrochromic properties are applicable to display devices such as electronic paper and smart windows.